MATTHEW KALLIMAN'S WEBSITE
​Songs and Teachings of the Bible​

"The ancient and popular doctrine of the Millennium was intimately connected with the second coming of Christ.  As the works of the creation had been finished in six days, their duration in their present state, according to a tradition which was attributed to the prophet Elijah, was fixed to six thousand years.  By the same analogy it was inferred that this long period of labour and contention, which was now almost elapsed, would be succeeded by a joyful Sabbath of a thousand years; and that Christ, with the triumphant band of the saints and the elect who had escaped death, or who had been miraculously revived, would reign upon earth till the time appointed for the last and general resurrection."
​
From The Encyclopediacaps Americana, article "Millennium":

"It is admitted on all sides that these views were, if not general, at least very common in the ancient church.  The belief was generally founded on Psalms xc, 4, according to which 1,000 years are before the Lord as one day, compared with the account of the creation as given to Moses.  The six days of creation are taken as designating 6,000 years of toil, and the subsequent sabbath as designating 1,000 years of rest and happiness.  The millennium was to be the sabbath rest of the new creation of mankind in Christ."
​
From "Why Were You Born?" by Herbert W. Armstrong (1957, 1972):
​
"For this grand and glorious purpose, God has marked out a duration of SEVEN THOUSAND YEARS!  Each 24-hour day of the Genesis 1 creation was a type of the seven millennial days of the spiritual creation.
​
"Except for those whom God specially and individually calls, for the first six millennial days, God leaves man to WRITE his lesson in human experience.  Man made the CHOICE of relying on himself under sway and influence of Satan.  God is allowing man to DEMONSTRATE beyond question his helplessness -- without God's Holy Spirit -- to live in a way that produces peace, happiness, and universal abundance.

​"Or, the parallel: God is allowing Satan the six millennial days for his labor of deception and evil.  And on that seventh millennial day he shall not be allowed to do any of his evil work -- he shall be imprisoned, while the living Christ brings TRUTH and SALVATION to the world. . . .

"Creation was not completed, as described in Genesis 1.  Rather, what God is creating is a SPIRITUAL CREATION, and God has mapped out a DEFINITE PLAN, allowing SEVEN THOUSAND YEARS for the process!  In His great purpose, the physical and material comes first, and always is the type of the spiritual.  A day is as a thousand years to God, and a thousand years as a day.  And, as God's revealed Plan is allotted seven thousand-year 'DAYS' for its completion, so God used just seven 24-hour days for the present creation -- the MATERIAL creation described in Genesis 1!  So the seven literal 24-hour days are a TYPE of the seven thousand-year 'days.'  And in this seven-thousand year period, . . . the SEVENTH millennial day shall be the SABBATH of the ETERNAL our God. . . !"
​
From "Mystery of the Ages" by Herbert W. Armstrong (1985):
​
"With God's great master plan of 7,000 years finally completed -- the mystery of the ages finally revealed, and with the re-creating of the vast universe and eternity lying ahead, we come finally to THE BEGINNING."
​
From "Chronology: The Key to Prophetic Understanding" by Ernest L. Martin, Ph.D (1990):

"There are strong scriptural reasons that the plan of Yahweh for the redemption of the human race occupies a span of 6000 years in which mankind has predominance and which will be followed by a 1000 year sabbatical type of reign of the Messiah called the Millennium.
​
"This 7000 year plan of God for mankind's experience is found in early Jewish sources.  In a first century work called Pseudo-Philo we read: 'There will be a foundation for men, and they will dwell between them for 7000 years" (28:8, 9).  The apostle Peter said, referring to events dealing with the creation account in Genesis, "that one day is with the Lord as a thousand years, and a thousand years as one day" (II Peter 3:8).  This same principle is found in a Jewish work published some 150 years before the birth of Christ (Jubilees 4:30), and supposedly was a reflection of the teaching of Moses recorded in Psalm 90:4 -- "a thousand years in thy sight are but as yesterday."
​
"It was also felt by the early Jews that the seven days of creation were each to be reckoned as one thousand years each in prophetic time or, 7000 years for mankind's existence on earth.  The last 1000 years was to be a time for God to rule on earth and for the earth itself to have a "Sabbath rest."  In the Book of Hebrews we find this very teaching shown.  "There remains therefore a sabbath-keeping to the people of God" (Hebrews 4:9 Greek).  This was a reference to the Millennium or the final 1000 years - a seventh millennial "sabbath" which occupies the last 1000 years of what appears to be God's 7000 year plan.

"What is interesting is the fact that the chronology of the Old Testament makes the passage of time from the First Adam to the coming of the Messiah (the Second or Last Adam) as being exactly 4000 years in length.  This exact period of 4000 years leads directly to the Messiah of Israel as beginning his prophesied role precisely at the start of the year 4001 from the First Adam.  And following the 7000 year prophetic plan as indicated above (6000 years for man and 1000 for a millennial "sabbath"), then there would remain exactly 2000 years from the first advent of the Messiah to his second advent and the beginning of the Millennium.  This means that the exact 4000 years' period is important.

"While all of this may be true, when does the 4000 years (determined through Old Testament chronological indications and including Daniel's prophecy of the Seventy Weeks) have their termination?  If one reckons the first 69 Weeks of Daniel to end with Messiah's birth in 3 B.C., then adding 2000 years shows the Millennium would logically start in A.D. 1998. . . .  But if one takes Christ's baptism in A.D. 27 as the terminus of the 4000 years of Old Testament chronology, then one should add a further 30 years (to reach A.D. 2027) before Christ will begin to rule on earth."   ELM on Chronology
​ 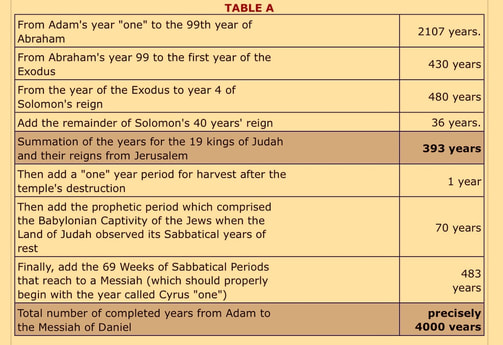 From ELM on Chronology
My comment:  God began calling and training Mr. Armstrong in 1927 -- precisely 100 years before the year mentioned by Dr. Martin above as the possible terminus of the 6,000-year period and the beginning of Christ's reign on earth -- and used Mr. Armstrong to proclaim the Good News of the World Tomorrow openly and publicly for over 50 years.   HWA on Prophetic Time Cycles

Excerpts from a letter I sent to family and friends during the 2020 spring Holy Days:

​"I have been thinking a lot lately about the 70 weeks prophecy in Daniel 9:24-27.  The first half of the 70th week pictures Christ's ministry, 27 to 31 A.D.  The last half pictures the 3½ years leading up to Christ's Second Coming.  The prophecy goes into 'hibernation' between those two halves of the 70th week.  This gap in the prophecy pictures the Church Age when God is preparing the Saints for the First Resurrection.  The two halves surround this very important period of training for the Saints.

"According to Dr. Martin's chronological reckoning, 27 A.D. was precisely 4,000 years after the creation of Adam.  This means that Christ's ministry started at the very beginning of the Fifth Millennial Day.  3½ years later -- at the conclusion of the first half of the 70th week -- God launched His plan of salvation for mankind as Jesus died on the Passover, was resurrected during the Days of Unleavened Bread and sent the Holy Spirit (the Spirit of Life) on Pentecost.  The spring Holy Days were fulfilled in 31 A.D. -- then the gap in the 70 weeks prophecy began.

"Plan your life as if Christ isn't coming for two hundred years, but live morally as if He is coming tonight!"   My Story
​
Excerpts from a letter I sent to family and friends on 7/17/20:

“I was just reading through the list of our new truths again“ [compiled by our daughter Deborah several years ago] “and would like to add one more item to the list. . . .

“It is this: that Jesus Christ will lead humanity into the World Tomorrow just as the high priest would enter into the holy of holies on the Day of Atonement.  The Seventh Millennial Day will be holy time.  God‘s presence will be in it.  It will not be cut off from God.  Being in the World Tomorrow will be like being in the holy of holies, in God‘s presence.

“The upshot of this is that anyone who wants to live on into the Seventh Millennial Day must become holy.  The unrighteous will be excluded.  Living through the fall holy days will be like traveling down a “road” (the “holy highway” mentioned in Isaiah 35 and elsewhere) that leads to the Utopia promised throughout the Bible.“
​
Excerpts from a letter I sent to family and friends on 6/14/21:

​"Sharron and I had a wonderful Bible study last Friday night about how God has predestined, specially called and prepared Saints who will be in the First Resurrection before the Millennium (John 6:44; Romans 8:28-30; 9:6-14; Revelation 20:4-6).  The vast majority of human beings born during the last 6,000 years will be resurrected and given opportunity for salvation after the Millennium (Revelation 20:5, 12).

"Jesus Christ became the first human being of many to receive eternal life in the Kingdom of God (I Corinthians 15:20-23; Hebrews 2:10).

"God used Mr. Herbert W. Armstrong for over 50 years to do His Work of proclaiming the true Gospel around the world.  That resulted in producing many more Saints, in addition to those who preceded them, who were specially called by God to be in the First Resurrection and who, having endured to the end of their lives and being judged worthy of eternal life will help Christ govern the world during the Millennium.  Children and grandchildren have been born to many of those who were called through Mr. Armstrong’s ministry.  The true Church is described in such Scriptures as I Corinthians 12:4-28, Ephesians 2:20-22 and Ephesians 4:1-16.

"God will see to it that His Message reaches the last generation at the very end of this age (Matthew 24:14; Malachi 3:1; 4:5-6; Revelation 11:1-12).  This will not be to call those people to be in the First Resurrection, but to give them an opportunity to survive the Great Tribulation, enter into His Church and become the first human generation of the World Tomorrow (Revelation 7).  That’s what the Days of Trumpets and Atonement are all about -- the next Holy Days to be fulfilled historically.  The people at the end of this age will be judged according to how they respond to God‘s Message when they hear it (Isaiah 65:12-16; 66:22-24; Malachi 4:1-3).

I thought I’d share with you some of my thoughts as a new round of annual Holy Days begins, which picture God‘s Plan for making all things new and right (Acts 3:18-21; Revelation 21:5).

The people of the world are stubborn and rebellious (Ezekiel 2-3), but “a perfect world is coming and this troubled world will end” (song, “Good News“).  https://www.matthewkalliman.com/good-news1.html

God cannot create character by devine fiat; it takes time, experience and the cooperation of His children.  Many Scriptures tell us that God is the potter, we are the clay and that God is love.
​​​​
Chronological Charts
"The whole vision has become to you like the words of a book that is sealed. . . ."
(Isaiah 29:11)
" . . . seal the book until the time of the end . . .
for the words are closed up and sealed till the time of the end . . .
none of the wicked shall understand, but the wise shall understand."
(Daniel 12:4, 9-10)
The Seven Millennial Days of Human History
Millennial Day Songs
Home